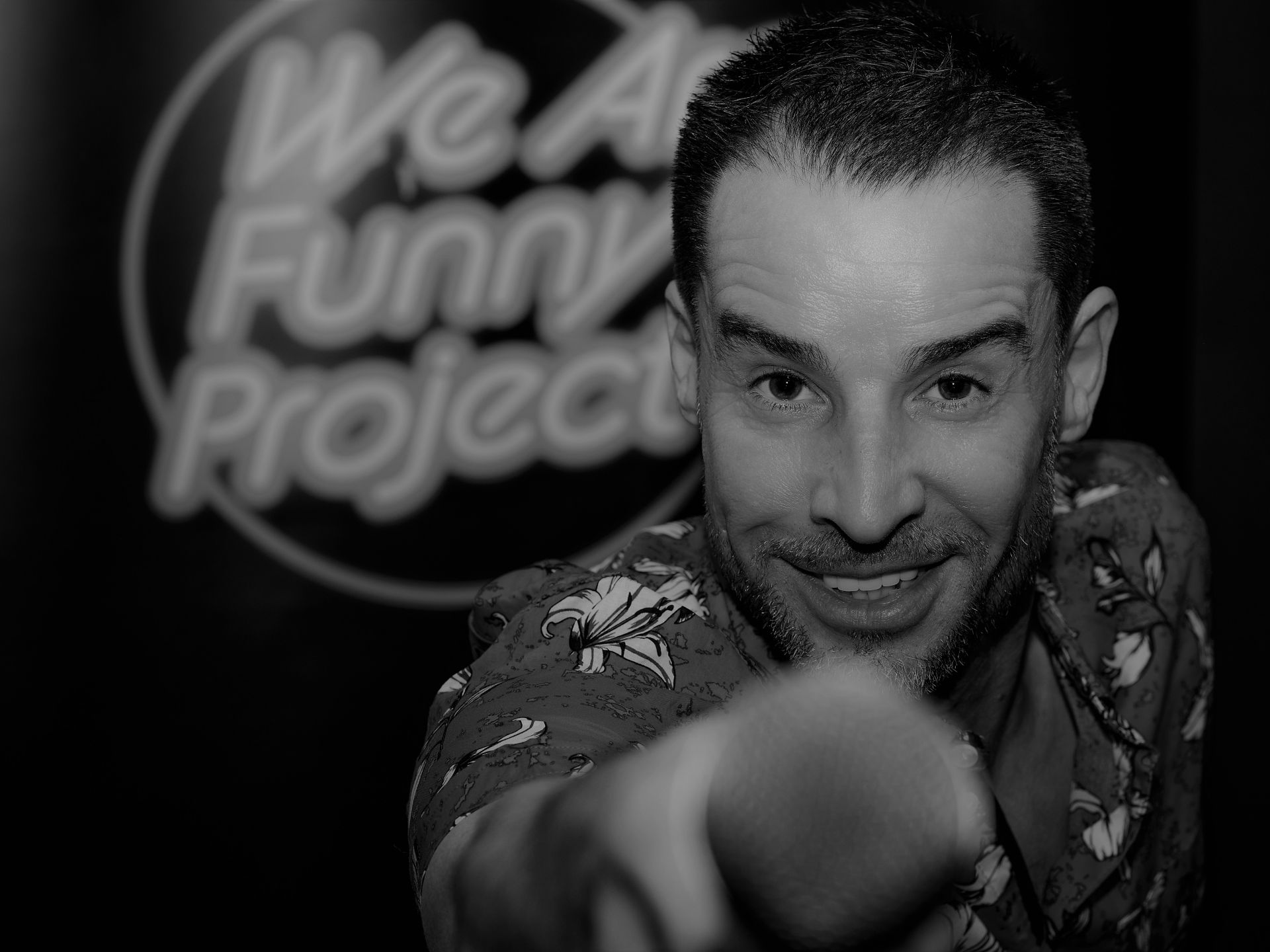 In my last blog entitled Writing for Comedians, I addressed some tactics for generating new material. All while dispensing with some of the angst that can come with the process.

This time… bringing it to the stage.

Having identified some solid premises, written them up, and edited them down, rehearsed… well, the next step is to perform that material. Almost certainly at an open mike night, though this of course depends on where you are in your comedy journey.

For the brand new comedian, all your material is, by definition, new material. You have not yet had the opportunity to stress test your gags enough to know precisely what is, and is not, working.

For the more seasoned performer, the likelihood is that you have some “banker” (aka proven successful) jokes. Now the time has come to sprinkle in some of the new stuff and study how it runs.

I would urge performers, outside of specific circumstances, to try and avoid running 100% new material in a single set. It is prudent to open with a strong joke(s) and allow the audience to relax and like you quickly.

Equally, ending on a reliable high is a smart move as the audience will have a residual feeling about you which is strongly influenced by their most recent memory.

Therefore, for an act with enough experience to have “banker” material to open and close with, my advice is to sandwich the new stuff in the middle.

Let’s assume we’re talking about a 5-minute open mic set, as is the most common spot on my We Are Funny Project shows here in London.

There will be immense change and improvement, tangible and clear

The total newbie has 5 minutes of material to run and is strongly advised to open and close their set on what they consider to be the best 2 jokes that they have.

With a word of caution. Controversial and edge-lord material is one of the totems and most wonderful aspects of stand-up, IMHO. However, such material is principally the domain of experienced acts who have spent a long time building into it, raising it up in their sets.

It is a painful rookie error to hit the stage with practically no experience and tell everyone “What you reckon” about… (fill in the contentious topical issue).

The odds of the joke being on-point, the persona of the act matching appropriately and getting a solid laugh are at best, slight.

Being an “edge-lord” is for a later era of your comedy, however, if you really must put in your “hot-takes”, please don’t open with them. Get some solid vanilla laughs at the top of your set to help make that noxious medicine go down a tad more easily.

I urge acts to learn to walk before they run.

Back to our notional 5-minute set. The more experienced the act, the longer I would allow the amount of time to work in the new material. Maybe just a single minute in the centre. Perhaps stretching to a banker minute to open and close the set, with 3 minutes for the freshest jokes in the middle.

When performing, I strongly discourage acts from taking the stage with notebooks or digital devices to read from. The occasional glance towards an inky note on the back of the hand is kind of acceptable and frankly, impossible for me to police anyway.

With all the remarkable effort that goes into performing stand-up I have always felt that it is a cop-out to fail to completely memorise the set. No clearly visible safety net is allowed.

A read through many of the accompanying blogs in this series will illustrate ways to produce invisible safety nets for performers to take solace in.

You thought that the joke was good
No one laughed
Why?

A solid litmus test for how well the material has been rehearsed and committed to memory is if there is a seamless transition from the tried and tested, to the new.

There will quite likely be a drop in the laughter rate, this is to be expected. However, the confidence and pace with which “the new” is spoken should be as close in styling as the opening and closing sections that are so much more familiar to the performer.

(Here's a link to a free taster video from the online "How To Be a Brilliant Stand-Up Comedy MC" course. This provides invaluable help for comedians to master arguably the most important role in a comedy show. More edited samples on this YouTube playlist for budding stand-up hosts)


I would discourage acts from bailing on the new jokes that don’t get the laughs that are hoped for by saying something along the lines of, “That’s the new material. I won’t be doing that again”.

You wrote it, you chose it, you said it. You own it.

Oh, and there’s every chance that’s a lie anyway. Most likely the joke will be edited and retooled and told again… until such time as all the efforts to save it have failed and it’s time to drop it altogether.

Like compound interest, the resultant
changes build upon themselves.

It could be that this “bit” is poorly positioned among the other topics in the set.

What one audience, certainly in the world of open mike, rather likes, may well be met with tumbleweeds at another gig.

I have closely observed over 7000 people telling jokes on one of my stages. I can testify that somehow, an act can kill with a set on Tuesday and come back to the same room with the same material and die on a Thursday.

This is rare, but far from without precedent.

There is more likelihood of variance in response across different comedy rooms. A quality MC will set up the likelihood of successful spots for every act, and thus, a poor MC can be a monkey on the back of an entire show. This is a very real factor.

If the room is under-populated with audience or has a very particular demographic… these elements can play against the chances of success.

More likely than anything is that the joke simply needs more work. It needs to be honed, edited and polished.

It should go without saying that a comedian never follows up a joke that lands with the power of a meteorite by announcing, “I’ve told that 700 times before, people always like it”.

There are tactics that a new act can employ to get better faster. One is to gather up as much stage time as possible and accept the failures and triumphs as they come, and simply keep on rolling.

Another can be rather painful and yet is a key tool in succeeding sooner.

Record your set. Ideally video, sound and vision. At very least, audio only.

Then with notebook and pen at hand, review it.

Make it easier on yourself by promising to not pall at the failures nor glow with pride at the wins. Dispassionately look and listen to see what worked and what did not.

Have fun while you’re producing yourself

The metrics are two-fold. What you think of what went down. Also, what the audience reaction seems to be.

The majority of this process will, unfortunately, be focused upon the negatives. You thought that the joke was good. No one laughed. Why?

Did you move the mike from your mouth and the punchline was in fact inaudible? If that’s the case, then try it again, exactly as is.

Maybe you looked at your shoes, and away from the audience, just as you delivered the punch. That will likely have diminished the desired effect. Next time, be sure to maintain that connection.

It is just as likely that the punch was telegraphed with too much information in the set-up. Or, inadequate information, making it too hard for the audience to “get” the joke.

Could it be that your popular reference isn’t that popular? If the audience don’t know a whole lot about Isaac Newton then they may not go with the your “Enlightenment” bit.

However, there are also positives to be discovered in the review process. One might find that the audience laughed in a place that you did not anticipate. Why?

Maybe you came up with something on-the-fly that really worked. You can now keep that for future gigs.

Patterns can be identified, such as, the audience like your observational material but not so much the storytelling.

This is not to say that you should drop the storytelling. It can lead to acknowledgement in your own mind, that this aspect of your comedy needs more work. More attention. More trials and testing.

The earlier that someone is in their stand-up journey, the less likely there will be frequent laughs. More experience, more laughter. Usually.

Add to this some knowledge of proven joke-writing techniques and broader comedy techniques. The journey from “dead set” to “killer set” will be delightfully shortened.

With this in mind, have a look at my online course Stepping Into Stand-Up Comedy which is custom-made for newer comedians with fewer than 100 gigs to their name. The reviews can be found here.

Please enjoy free sample videos on the We Are Funny Project YouTube channel.

What is eminently true is that stand-up has a steep learning curve. There are joyful thresholds to cross, and every comedian knows the utter delight of the first set where they killed from top to bottom.

Recording your sets as a matter of habit is critical. Only, if they do get closely reviewed.

Note your observations. Write up the changes. Rehearse and memorise them accordingly.

Like compound interest, the resultant changes build upon themselves. There will be little difference between one gig and the next.

Tweak a couple of things in one set, run it, tweak a couple more. Keep tweaking and over the mid and long-term the results will be profound.

One lovely aspect of taking the advice to record and review your sets is that you will end up with a bank of footage. There is sheer pleasure to be had when a comedian reaches an arbitrary marker, say 100 gigs, and can then go and look back at, say, their 7th gig.

There will be immense change and improvement, tangible and clear. This is a solid reward for boldness, hard work and persistence.

Success, in almost any sphere, comes with those 3 efforts.

Should you ever be feeling down about what recently happened on stage, please do remember, there is no successful comedian on planet Earth who got there without boldness, hard work and persistence.

Have fun while you’re producing yourself because it’s a long and bumpy ride permeated with joy and disappointment. The more you perform, the more you review, the more the tide turns in the favour of your joy.

Now, you go and do you. Please feel welcomed to view the wide array of videos on the We Are Funny Project YouTube channel. Subscribing and kindly comments are encouraged.

Declan Hill's in-depth, in-person comedy workshop is ideal for anyone who is new to the world of sitcom writing.
More details
Online courses

Enter your email for updates

Enter your email for semi-regular updates on all things comedy-related, plus offers and course announcements from the We Are Funny Project.
Thank you for subscribing!