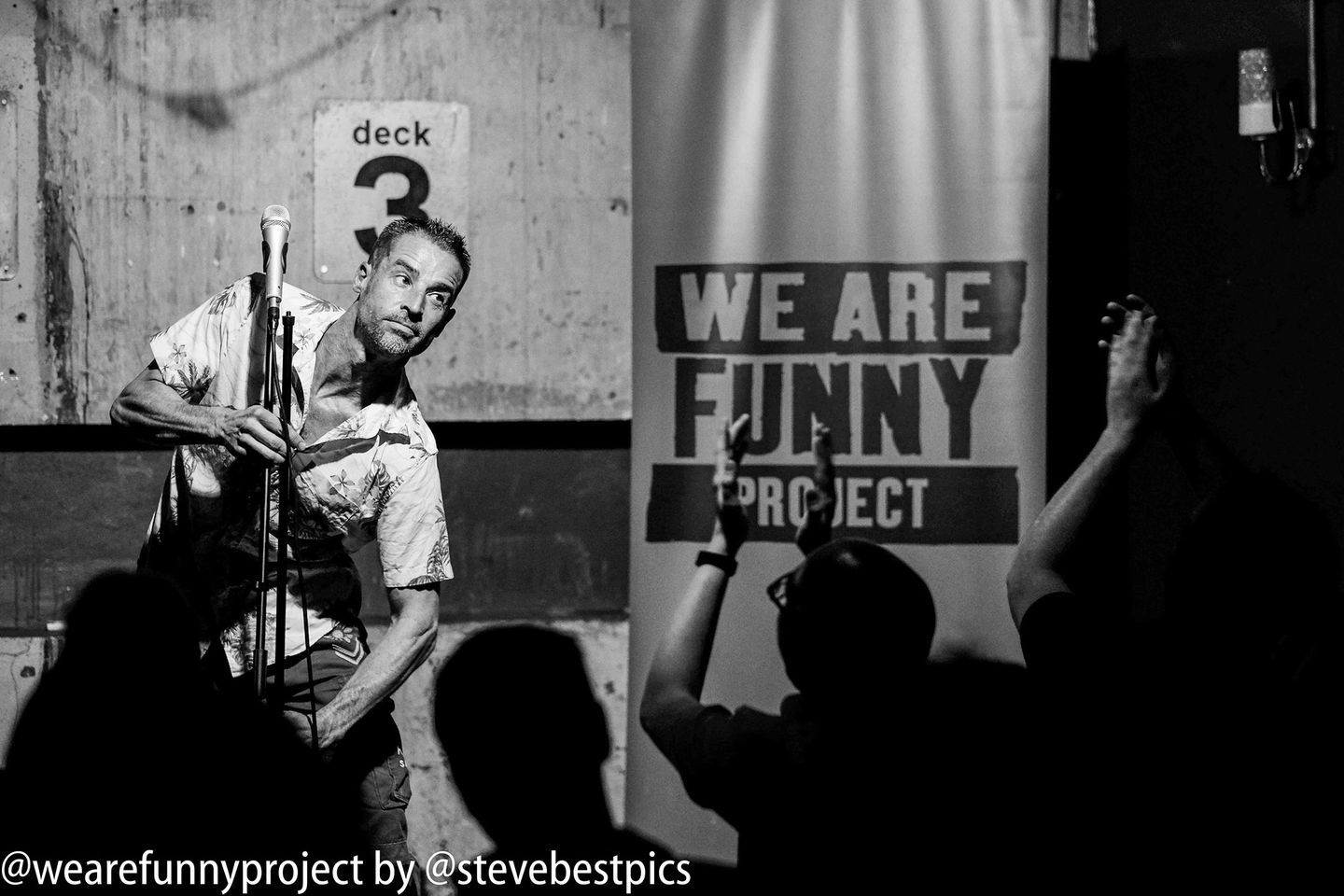 “The scariest moment is always just before you start” Stephen King

Stephen King is not a comedian. However, he knows something about using imagination. He has a prolific output. Understands the writers’ journey.

I am not a comedian either.

My role is that of a booker, MC, promoter and comedy tutor.

When it comes time to write a joke, I recommend never sitting at the blank page or screen and trying to suddenly be funny… there’s a much easier process. Though still not easy.

* generate a slew of ideas

* edit out the lesser ideas

* focus on the best ideas

“The first draft of everything is shit” Ernest Hemingway

I am quoting non-comedy writers as so much of the authoring process is universal. There are, of course, differences when it comes to joke writing.

The book writer needs to mine a premise in epic detail to incorporate the plot, characters and timeline.

In screenplay writing it is considered ideal to enter any scene as late as possible.

For the comedian, one can jump in and out of a premise at pretty much any point. The topic can be fleeting or extended to the point of being a “chunk”. Regardless, it should aim to wrap up on a big laugh.

The creative process does not begin with writing. That comes later. So long as it does come later, the writer can cut themselves some slack.

“Fix it. Remember that, sooner or later, before it ever reaches perfection, you will have to let it go and move on and start to write the next thing. Perfection is like chasing the horizon. Keep moving” Neil Gaiman

Pondering comes first. The writers’ starting point is almost always the premise. We are not seeking a finished piece, merely the germ of an idea. Take some time to observe.

If one is lacking focus on how to write a joke, then start documenting the crazy shit that passes through your head. We all have those weird, seemingly pointless silly thoughts. Those wandering thoughts are often fertile ground for writing comedy.

What if..? is a very good question to ask.

As an MC who closely observes new comedians all the time, I can testify to the fact that it is a common rookie error to mistake a premise for an actual joke.

The example is not yet a joke. It’s just a premise. Good or bad.

That single line can be deleted, edited or fleshed out later.

One may not be “writing” as such but certainly the creative process is in effect.

Paying attention to your own wild thinking is one method. Another is to go for a walk where there are lots of people. Pay heed to the little voices in your head that comment on what you are seeing.

Perhaps record information on who, or what, annoys you.

Maybe contemplate anything you see that is somewhat surprising.

Jot down such ideas in your notebook. (I’m old-school so I’ll stick with notebook and pen. Feel free to supplant that imagery with the digital device/recorder of your choosing)

Keep this up for several days and soon enough there will be lots of scribblings. Many will be rubbish. That’s fine.

(Here's a link to a free taster video from the online "How To Be a Brilliant Stand-Up Comedy MC" course. This provides invaluable help for comedians to master arguably the most important role in a comedy show. More edited samples on this YouTube playlist for budding stand-up hosts)
It is a long way from the premise to the polished final material. Gag-writers and storytellers can take a lot of solace in recognising this fact.

The joke writer should finally reach the computer with a flowing notebook. Many recorded thoughts will likely be scratched off as not everything is gold.

Copy your surviving notions onto the computer.

You have now developed some ideas and gained some momentum. Lovely.

·  Would we get steak flavoured breakfast cereal?

·  What would the marketing look like? Booze becomes Moo-ze?

·  How would children be affected?

·  What kind of people would start working at the dairy?

This simple piece of development will help to highlight the better concepts. This approach on how to write comedy will provide a fresh opportunity to drop some of the weaker ideas.

You are now cutting through towards the most promising material. Further finessing is required.

“Writing is easy. All you have to do is cross out the wrong words”
Mark Twain

Revisit the surviving observations. Play around with the following approaches to joke structure.

·  Place your wild idea into an imagined world.

·  Get into the details.

If you want to be a comedy writer, then it is entirely helpful for you to be aware of certain writing techniques and comedic exercises. My online course, Stepping into Stand-Up Comedy, is custom made for newer comedians and is packed with joke-writing exercises. Here is a sample video for you to consider.

One comedy concept to be aware of is that if your topic is “weird” it will be most effective if you place it in an ordinary back drop.

Alternatively, if the issue is bland and representative of everyday life, land it in the most unusual and bizarre setting.

Many joke writing opportunities will arise from the contrasts. Weird in normal. Or. Normal in weird.

Comedians are looking for a series of gags to perform on stage. You may well find that ideas overlap. This can provide for a series of punchlines. All from one topic. Meaning that you are generating more than just a joke, rather a structured comedy “bit”.

There are many drafts to come. Meaning you can easily craft the material in a “be-more-gentle-with-yourself” fashion.

“To write is human, to edit is divine” Stephen King

It is common for the brain to take some time to absorb information. Sleep provides the key ingredient for processing.

That’s right. One can justify delaying actual writing by letting a premise sit in your mind for a day or two. Allow your joke writing process time to breathe and see what imaginative ideas your subconscious will later generate.

Often the improved twist, the better setting, the ideal wording will come as an “inspirational flash”. Usually around a day after initially toying with a concept. Often while doing something banal such as brushing your teeth. It can seem as though the conscious brain was not even focused on the challenge.

Provide an opportunity for inspiration to intervene. Tomorrow.

Often you’ll feel a core belief in an idea… you’ll know if it really appeals to you and want to stick with it. Just as one will know if what seemed like a great idea yesterday really stands up when reviewing it today.

Editing is as much of the process as the actual writing. You will find the need to drop appealing ideas that don’t seem to be going anywhere. In the world of writing this is known as “killing your darlings”.

If you really like the idea, the joke, then keep it. Run it on stage. It can always be developed, or dropped, later.

Block out specific time periods to write. When it comes time to write, well, you do not have to actually write.

Yet, in this time period you can’t do anything else either.

No television. No social media. No phone calls. Drop the distractions to muse, ponder and ruminate.

Ongoing finessing of material is now in effect.

“If you expect to succeed as a writer, rudeness should be the second-to-least of your concerns. The least of all should be polite society and what it expects. If you intend to write as truthfully as you can, your days as a member of polite society are numbered, anyway” Stephen King

Ultimately, a few of the original brain blasts and obscure observations will make it through the process. So long as you like the material, it’s all good.

Repeat this comedy writing process. Drill ever deeper into the remaining material. Review it and add new angles. Write it up again. Edit out the extraneous words. Punch up the remaining content with more evocative language.

After a rather limited period of time you will have learned something of how to write a joke. Will have worked out some writing structure and be on your path to getting real laughs.

Of course, all of this merely represents the “end of the beginning”.

For now, the stand-up needs to go and perform the new material. This is a process all its’ own.

Meaning that a further range of procedures are required to work out the material from the stand-up stage itself.

I’ll address this more fully in a future posting. In the meantime..