Some Key Ingredients for a Quality Stand-Up Comedy Show 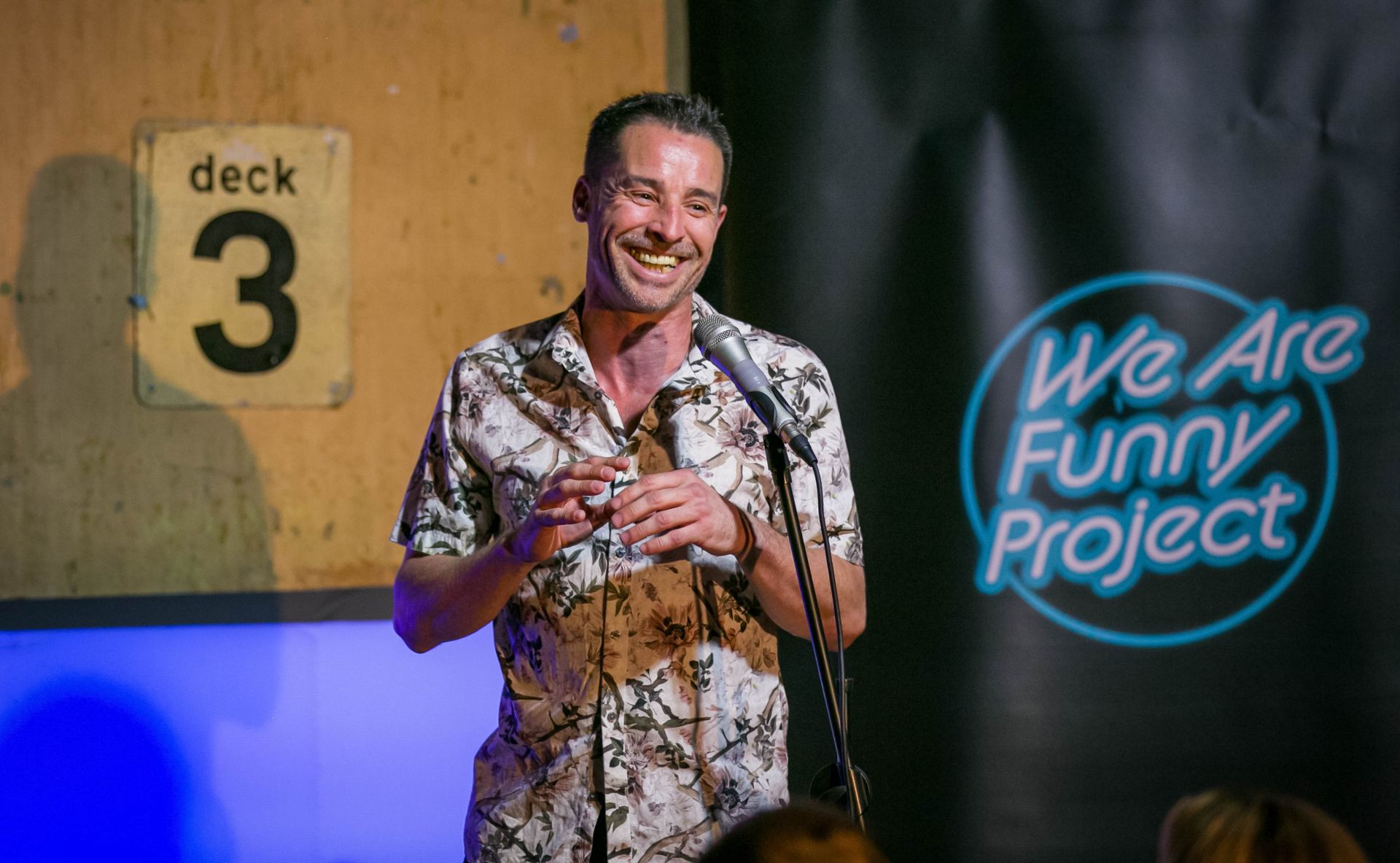 When I started running open mic comedy gigs, I had no experience in the world of stand-up. Beyond being a keen fan and regular punter.

Now, more than a decade later I have come to realise that there are essential ingredients for producing a good show. To ensure the acts feel supported.

For me, possibly more important than any other “touchstone”, is my notion that a comedy open mic should be “a safe place to fail and a great place to succeed”.

Certainly, the bill of any gig ought to be a blend of brand-new acts alongside more seasoned comedians, with proven comedy chops. It can be that an act with just 5 gigs under their belt is genuinely funny and gets regular laughs. Though unlikely.

However, every new act needs the stage time so that they can get better. As ever, the road to improvement is the all-important stage time/minutes backed up by regular experimenting and practise.

Putting on an entire bill, of say, 12 acts, all with fewer than a dozen gigs would almost certainly be a dreadful show on account of the lack of quality.

Therefore, a minority of acts on my bill would be “new” and are thus given opportunities to learn and impress. The majority will be that much more experienced, likely known to me already, confident that they will raise the laughter rate and help the show be a good ‘un.

Some of the “seasoned” acts may well be working out a lot of new material, and regardless of experience, new material is always hard to judge. Until it’s in front of an audience who will literally judge it, by laughing, or not.

Even if the new material from a seasoned act goes well, it’s still just a first incarnation. These freshest jokes will need working, editing, polishing and all the rest. The aim of the comedian is to finally get the bits in their best shape and optimised for comedy effectiveness.

I do not believe that an open mic gig should be any kind of “safe space” for the audience. The punters come in, fully aware that they are to watch a varied and typically amateur stand-up show. They almost certainly did not pay an entry fee, so their rights to complain are surely diminished.

Quality promoters and MCs work tirelessly to make the show as welcoming as possible for acts and audience. At the end of the day, I feel a greater concern for the acts.

After all, comedians are the ones who have come up with a premise, written it up, edited it down, rehearsed it, memorised it, travelled across town to perform. The acts risk scary measures of their self-esteem to try and make a room of strangers laugh.

If I can allow myself to be a tad glib here. That is rather more commitment than an audience member who “just popped in”.

If someone goes to a paid show, then they can rightfully expect a high quality of professional acts. On a bill of 3, it could be that they do not like one of the performers as matter of personal taste, yet don’t stop laughing throughout the other 2 comedians. That’s a lot of laughter, entertainment and value.

On an open mic show it’s more of a rollercoaster with the lows being lower. The highs, perhaps, being equal to the professionals. Though only able to sustain in a shorter set.

With the stakes being so much lower, a significant silver lining is that the comedians are more liberated than they ever will be, to experiment and try things out.

With typically just 5 minutes on stage, even the worst crash should not be enough to derail the entire night (though I have seen it once or twice). My assessment is about 99.9% of acts who die on stage were legitimately aiming to generate laughter, and not merely trying to cause offence.

Many comedians want to “play to the edges”. Test where the boundaries are. They wish to assess audience reactions not just to actual punchlines, but to themes and social topics.

How is a new generation of future genius talent supposed to “find the line” without sometimes “crossing the line”?

The answer is, they cannot.

For those who want to go “there” it’s a tough and lengthy exercise in calibrating a topic, the mood, and the audience.

Think of some of your favourite ever professional comedians.

If any of the “legend” names such as Dave Chapelle, Alexei Sayle, Bill Burr, George Carlin, Bill Hicks, Richard Pryor, Jerry Sadowitz, etc are on your list then please consider some version of the young “them” starting out.

Imagine the sweat and tears endured over years, as they are figuring out what they wish to address. Testing which unique angle(s) they will take. Learning how to get more and bigger laughs.

It is unavoidable for an act to try and map those territories without failing relentlessly. Until succeeding spectacularly. Stand-up comedy can be a brutal muse.

The open mic room costs the audience nothing to enter. Certainly, we should cherish our audiences. Were it not for these wonderful people and the potential laughter they bring, stand-up has debatable value.

The “Boogey-man” of comedy is the vicious, hateful, bitter performer who attacks (fill in the target of your choice).

Thankfully, we grown-ups know that the “Boogey-man” does not really exist.

Remember my stated ethos of making my room “a safe place to fail and a great place to succeed”.

Unless I get a clear sense that the person on-stage is more interested in being offensive, rather being funny, I am broadly inclined to let them run. Hell, I am even inclined to protect them.

Certainly, when I re-take the stage and control of the PA, I can publicly address what just happened if I need to. However, there is, as with so many experiences of being in error, a built-in penalty for the perpetrator.

In this case, I’m talking of the instant feedback loop that is the audience.

An act who spends their full 5 minutes (or however long they have) jamming away at the worst and darkest societal topics, sans punchlines, to utter silence and evident revulsion, will typically endure a sense of failure and shame.

Failure and shame are good motivators to move “away” from certain behaviours. Or at very least, seek to adapt and improve said behaviours.

The act may not have the awareness to understand that they were nowhere near getting a laugh. Perhaps they merely speak on a dark topic rather than try and approach it from a unique angle. Maybe they evidently take glee in the dis-comfort of the crowd and getting laughs was never the true aim… well, screw these non-comedians. All 8 of them.

Such folk are not sincerely seeking the laughs. Nor are they investigating fresh and untrammelled ideas. These are not impassioned artists willing to take the knocks en route to some later success. They are in fact, arseholes.

They are also, extraordinarily rare.

Further, they are extremely easily dealt with.

Over the years, I have provided stage time for over 8000 people. The number of acts who fall into this “arsehole” description is, literally, in the single digits.

Here’s what happened on the ultra-rare occasions this has been an issue. The audience made it clear they did not like the material. I assessed the intent of the performer to outrage rather seek to gain honest laughter. I then rinsed them when I returned as MC. Then, I never booked them again.

Hell, many of us promoters are friends and often enough provide a “heads up” if an act causes notable problems in one form another. It’s rare, but that network exists, and each promoter makes up their own mind whether to give the act a(nother) chance.

Such acts are the teeniest minority of performers, extreme outliers that never get to stay in the scene for long. No one stays in the open mic scene for long if their bad faith and lack of skill is utterly self-evident.

Most of us understand that we now live in a society riddled with faux, and sincere, outrage.

It remains so important to understand the difference between the “arseholes” and those newer comedians who represent “undeveloped potential”.

There’s a certain feeling of danger in an open mic room that most often really is not available in a pro room. For the pros have learned (much at open mic level) what will and will not fly.

It can be utterly thrilling watching a newer act fail to understand what they “should not do” and against the odds, succeed.

On a level closer to the “can’t stop watching the car crash” mentality that is so common among us humans, it is also quite the spectacle to watch them try what they “should not do” and fail.

The fascination remains as I get to watch them come back, having tweaked some, and try again, over and over. Until finally proving that one can indeed make a “silk purse” from, well, something ugly.

I urge promoters and MCs to ensure the performers have every chance to succeed, appropriately rewarded with laughter and further opportunities.

The essentials are to ensure the performers will be clearly visible with a stage that everyone. Along with effective lighting and a decent P.A. to ensure that the spoken words are perfectly audible.

A good room will have enough “real audience” for the laughs to fly when the “punches” land.

A well-managed show will run on time, to schedule, with appropriate breaks for the audience to refresh themselves. Ready for more laughter.

Quite obviously, the lynchpin of a show is the MC. If the host cannot manage the basics, warm up the room, communicate with the crowd, keep everything moving and elicit some laughs of their own, then it’s going to be a loooong night for everyone.

An MC who mocks an act who has crashed, unless that performer is the most egregious type of “arsehole”, is quite simply a very bad compere indeed.

Promoters and MCs, I urge you to make it so there is a soft landing for when a comedian fails. It’s not a good thing to kick someone when they are down, when they have tried in good faith. They already “got” the lesson via the audience reaction.

“A safe place to fail and a great place to succeed” is an approach that serves everyone, audience, and most especially, the comedians.

There is a broad array of comedy education, interviews and plain weird and funny performance videos there. All for you.

To get your .pdf copy of 8 Problems Comedians Run Into and How to Handle Them--and get regular updates and offers from the We Are Funny Project--leave your email address below, and we will send you a link to your e-book.
Thank you!