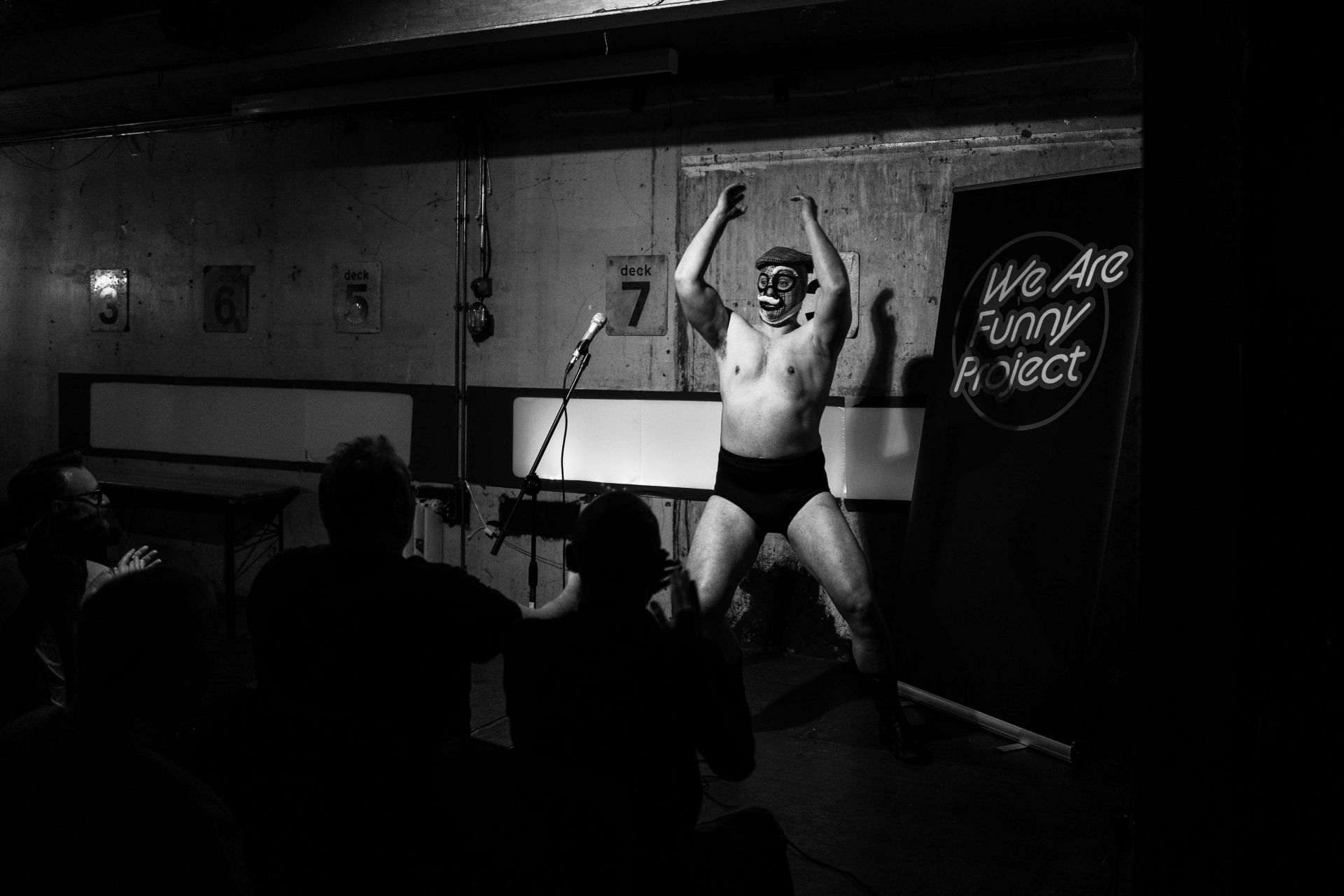 This week saw the 9th Birthday party/show for the We Are Funny Project. It was a wonderfully fun evening where the acts, for once, were the audience. Happy comedy people, untroubled by a common prospect of imminently performing.

Which got me to thinking about the fun and opportunities built in to playing with show formats.

The birthday show was a different format to the most typical open mike shows that I produce, promote and MC.

The We Are Funny Project has a long, proud tradition of messing around with formats for live comedy shows. Some of our formats have been inspiring. Others, downright dangerous.

Playing about with show structure is a golden way to keep acts and audience refreshed and engaged. Comedy formats can be an awesome way to encourage acts to generate new stand-up material. Turbo-charge those comedy ideas.

I'm going to share details of some of the wild formats we have played with over the years. Some were, most definitely, one-time-only shows.

For our birthday, there were only 3 performers booked for the whole evening. There are normally 14 acts per show.

The opening set with Jerry Bakewell, the Mexican wrestler comedian, was a uniquely structured set following his recent appearance on "Britain's Got Talent".

The remaining performers are stand-up professionals. They came to provide something of a masterclass in great writing, delivery, and style. Thank you, Lateef Lovejoy and Scott Capurro.

Back in the day, I ran 6 weekly We Are Funny Project shows. It had become less interesting to run the same format all the time. So, we used to shake it up.

Many videos of these performances are found on the We Are Funny Project YouTube channel. I'll soon be adding much more content after something of a break, please do Subscribe. (I am aware that the video/sound quality varies from video to video)

How was I to know that one of the “formats” would result in 25% of the performing acts being hospitalised?

I’ll come back to that one.

The most common break from the traditionally structured shows was the “We Are Funny Challenge”. This set-up was designed to encourage acts to stretch their wings, write new jokes and freshen up their stage performance.

For those of you running shows, I suggest you can keep the creativity and the interest boosted with some fun brainstorming and effort.

It went like this… I would hand-pick a blend of the pro, semi-pro and fascinating/promising open mike acts. They would be invited to “take the challenge” and agree to perform on a certain date.

Once I had my approved line-up, 2 weeks before the show itself, each performer would be informed of the topic for the show. The comedian then had to write brand new jokes and tales to that theme.

Everyone then came together on the same night to give their jokes a first airing. I must have produced 20 or more of these shows. The topics ranged through matters such as, “Worst Holiday Ever”, “Bad Boss”, “Virginity”, “Favourite World Cup” and “Problems at Work”.

The effect was amazing. One particular/peculiar performer decided to go musical for one such show and has stayed that way ever since, doing well on the pro circuit these days.

Others had laboured the same 5 minutes for months (or so it seemed) and then managed to get more and better laughs in these new 5 minutes.

The “Challenge” shows were so fresh, imbued with more nerves than usual and obtaining more laughs than normal.

With my wonderful friend, Siobhan Dodd, we produced themed “Variety” shows. Yes, as the title suggests, there was more than pure stand-up, with sketches and music and magic and more… We found that many comedians have more than one skill set, and so would bring their full range of entertaining qualities to the stage for these unique gigs.

Laughs permeated every one of these nights and ran on topics such as “The ‘90s”, “Science Fiction”, “Hen Party” and a whole load more.

Once more, a freshening up of what the acts could aim for on stage, and always deliciously entertaining and demented evenings.

We were most lucky to have Lewis MacLeod, Britain’s foremost impersonator of both Boris Johnson and Donald Trump perform at special shows. Once for the “London Town” (when BoJo was London Mayor and not yet the PM) themed Variety show and again, as Trump, for the 2016 US Election special show.

For a brief period, we ran National Day themed shows, such as “Australia Day” for Aussie ex-pats in London. We had the “July 4th” all-American bills and crowds.

Clearly, not all the innovative and unusual formats could be winners.

I ended these after a “Canada Day” show with 6 pro Canadian acts. The first 5 acts crushed, as is common with Canadian comedians. Finally, the unbelievably drunk headliner rocked up on stage, began berating a lady in the front row, messed up every joke and crashed harder than any act I have ever seen.

Having wrapped up a great night on a bum note, I was making my way to my motor bike to go home. Only to find that same trollied headliner waiting for me outside. He kept threatening me as he followed me to my bike.

Thank goodness for heavy bike lock chains and their industrial weight padlock. Peace soon broke out when I began twirling it. No violence, I am happy to report.

We have, of course, had remarkable things happen on regularly formatted nights.

·       A “balloon battle” between an Opera Singer/Mexican Wrestler

However, “We Are Funny Swapsies” was probably the crowd favourite.

The premise was simple. 12 comedians were selected well in advance of the show day and then I paired them off. The casting would typically be focused on the immense dis-similarities between the performers.

These wonderful folk would agree to perform absolutely anything given to them by their partner. Like a game of dares… some were evil, some were touching, all were amazing.

The late great Harry U Eldrich ruled “Swapsies”, the acknowledged king of the format. Smart and wild.

I’ll give special mention in this blog to an outlier event/video. For this one is not a format, just a remarkable moment in my comedy career. Recorded at the first comedy show I was ever involved in promoting.

My virgin outing saw a bar brawl break out.  Not unlike a 1970s Burt Reynolds style farango. Thankfully, never seen a fight break out since, more than 1500 shows later (at time of writing!)

“Hecklers” was another show we ran for some time, managed by old WAFP ally, Alex Martini. The clue really was in the title. Volunteer acts were given 5 minutes on stage. For the first minute they performed stand-up un-assailed. 60 seconds in and the klaxon went off.

The remainder of the set was open season for audience (many being acts themselves) to heckle the performer and the performer fought back. Best as they could anyhow…

Hey, we even did a show on Bitcoin. Long before your grandma had heard of it.

Does crypto-currency and comedy mix? I’ll leave that for you to decide…

Of course, given my earlier career as a film reporter/documentarian, the cinema was always going to bleed into the creative formats.

The tremendously talented Richard Todd was challenged to use The Shawshank Redemption as inspiration and basis for 5 brand new minutes of stand-up.

Hell, we even did a whole show called “We Are Funny Stars”. This was themed around the movies and career arc of Brad Pitt. Hand-picked acts were invited to perform, then assigned a film to watch and work into a set.

Running in chronological order we got an insight to the highs and lows of the man, his movies and, erm, his marriages.

I enjoy some pride in the fact that nearly all the talent I cast in “Stars” have gone on to impressively bright careers in comedy and broadcasting.

To this day, I am convinced there is, with the appropriate production resources and clearance issues resolved, an incredible broadcast format in “Stars”.

Clearly, not all the innovative and unusual formats could be winners.

The “Drunk Comedy Challenge” that we ran for St Patricks Day many years ago will never happen again. At least, not by my hand.

Here’s how it worked. Or did not work. (Although, is fair to point out that there was a lot of laughter that evening.)

8 acts were hand-picked and accepted the Challenge.

Each comedian performed a 5-minute set in the first section. Before even exiting the stage, they consumed either a pint of beer, a large glass of wine or a double spirit shot.

For the next hour, they were provided generous amounts of alcohol.

In the 2nd half, the now smashed acts had to perform the same 5-minute set. Would we be able to tell any difference in timing, etc?

Clue. 2 of the 8 acts ended up going to hospital for alcohol induced issues. We weren’t even efficient enough to get them in same ambulance as they “hit-the-wall” (in one case, quite literally) at different times, soon after the show.

We all know that “killing” in comedy is a good thing. Not like this though. Happily, everyone survived and gigged with me again.

Credit where it is due, one of the older acts on that bill drank more than anyone, and wasn’t even slurring… drinking, as with anything else in this world, is about “practise making perfect”.

For those of you running shows, I suggest you can keep the creativity and the interest boosted with some fun brainstorming and effort. It’s more work for sure.

Sometimes, I assure you, it’s worth that extra effort.

There is a broad array of comedy education, interviews and plain weird and funny performance videos there. All for you.