This show shouldn't have worked... but it did! 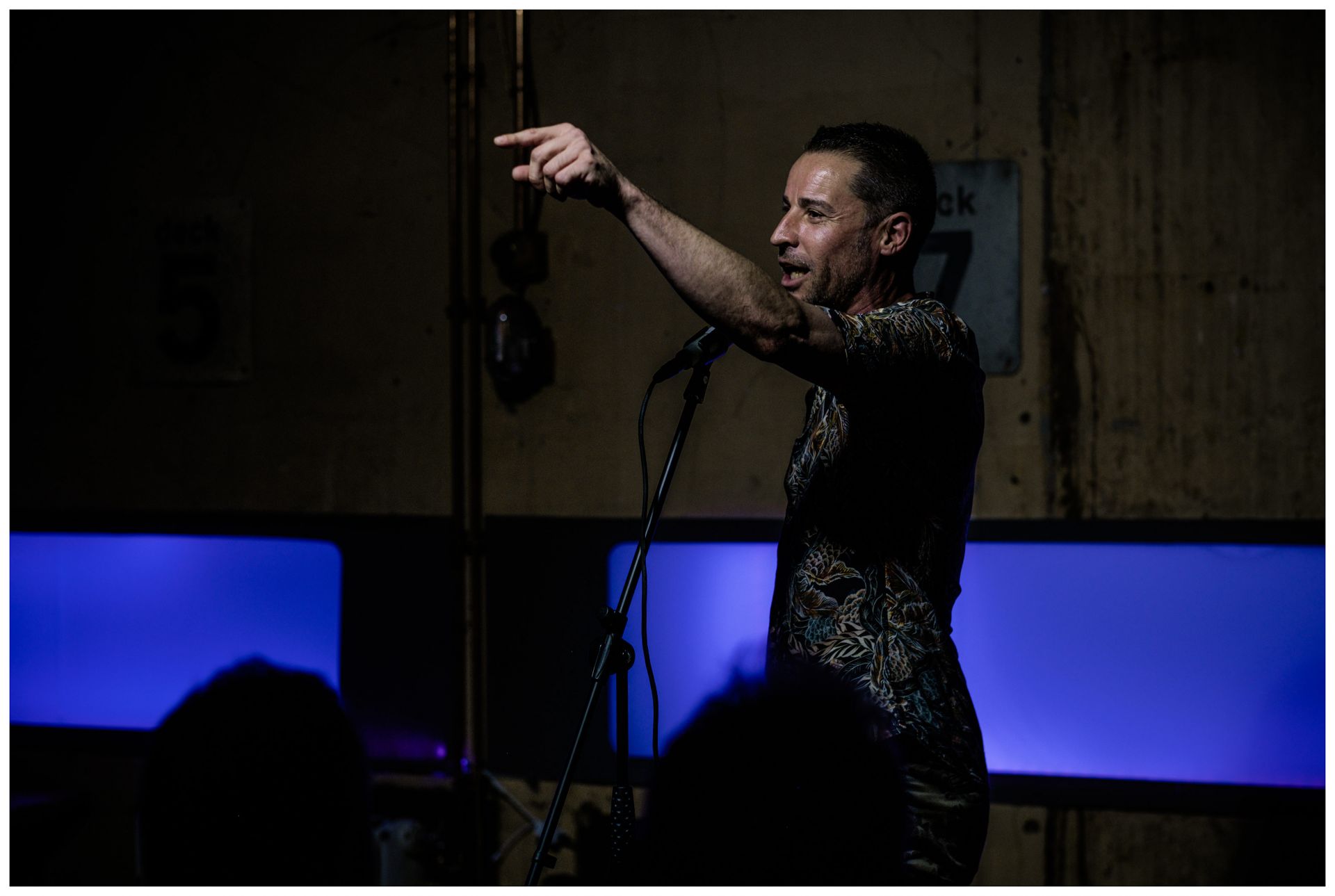 Welcome to the 2nd We Are Funny Project show review/tips bulletin/love and hate fest.

I run 2 weekly shows and plan to drop you a blog after each, however, due to tech gremlins as we get this up and running, it took a week to get the first out, so skipped over last Wednesday and here we are again, looking back on a Tuesday show.

Last Wednesday was standing room only, honest. Last night was again, a case of acts outnumbering audience, as it was last Tuesday. Just 7 shows back after the re-launch it is too early to see a pattern as 2 Tuesdays have been rammed with the Wednesdays on those weeks being less busy. Time will tell… the fact is, as the nights draw in, and people settle into their post-Summer routines, we are approaching the peak months for London live comedy with no competition from beer gardens and the like. It’s only going to get busier.

“I know nothing of football, but I am familiar with the concept of 'Playing to the final whistle' and comedians, you need to approach every single gig with that mentality”

On paper, last night would have seemed like a disaster show waiting to happen, even just minutes before the show began. More acts than audience, and with the new wave of comedians coming in, lots of unknown acts (to my eyes anyway) with lashings of new material bouncing around (new material is of course less reliable than the tried and tested). Yet it really did work, one of my favourite shows since we returned.

Yes, I am cocky enough to state that as such an experienced MC I have tricks and techniques to bolster such a room, but I can’t do it on my own, especially if act after act, tanks. Which is why, even though stand-up is a “lone wolf” past time, it takes a village… and with so many of the acts bringing some great material and leaving me some cracking storytelling segue, it was a case of snatching victory from the jaws of defeat (or is it the other way around? I always get confused with this aphorism, probably shouldn’t use it then…).

“Very soon indeed I will start cutting off the late comers.”

Due to a Facebook outage on Monday, and a happy matter that involves a yet-to-be-born baby (that’s all the info you are getting here), I switched out the planned headliner until next week and took a shot on a new face with evident experience. That worked nicely! More on this later…

11 acts were booked, 11 acts turned up, 8 of them on time. People, I’m being patient, but it’s running thin. Very soon indeed I will start cutting off the late comers. If you are running late, there is no reason you can’t message me to tell me (as 2 of these 3 did, at least). open mic may be amateur but if you want to get anywhere, act professional. Please.

Of the 11, only 4 were “returning champions” from before the pandemic, whom I had some familiarity with. The rest were wild cards of the new era with an average of fewer than 40 gigs each, with one act taking his first ever go at stand-up, popping his chuckle cherry on The Project stage.

I’m an optimist by nature, but I was left wondering quite why I had booked such a bill. Even the “old faces” are still shaking off rust and working in new material written during lockdowns, so many reasons this should not have worked. What do I know after producing more than 1500 such gigs? Not very much, it seems…

I opened the show with the act I considered to be the most flamboyant, kicking off the gig with energy, as should be the case. He’s a relative newbie, had not yet learned that running 5 minutes of new material in one set is ill-advised, typically squeeze in new material between the more tried and tested stuff. That’s the beauty of naivete, you don’t know what you ought not to do (I told him later, of course).

Thing is, much of it worked, punchlines delivered with “jazz hands” can have extra oomph and the fella carried it off and I very much look forward to bringing him back for future shows.

The next act up is a slightly more dour chap, with great proven jokes which he delivered nicely, though I know he bottled the new stuff and for this he was lightly berated after his set, because I have heard that new stuff and it’s solid. A fine contrast in the opening 2 acts.

The next act up was the Virgin. I have hosted well over 500 people running their first ever set and pride myself on being a caring pair of hands when looking after acts who are as nervous as they are ever likely to be. The man is a character act and wisely has chosen a stage name so for once will name the name, Simon Kelvick. He plays creepy outsider, comes across as harmless, yet says some dark things about settling scores with the youth of today, tomorrow. He got real solid laughs, an applause break on his first ever gig! I would say he is in the top 20 acts I have ever seen perform their first set. Yes, of course he has lots to learn, not least mic technique, but the material, the surety of his delivery, massive props to the newest of newbies.

The remainder of the first half saw an old face return with new material, hit’n’miss (you know, like new material) he was the first to admit. Then another new face, just 10 gigs in. If a lesbian with cerebral palsy can’t bring us unique takes on the world then I don’t know who can… and she did, with solid laughs and a charming manner.

The next 2 acts are long known to me. One of which I have seen since the return and the other I have not seen in over 18 months, the former is getting better fast, the other still carries the same self-deprecating charm and solid punches he did oh-so-long-ago. Also, he doesn’t look so much like a member of the Hitler Youth as he thinks, more like, the least recognised member of a Boy Band that failed 5 years ago. Heh heh.

Then the closer in the first part brought an uneven set, meaning he had some good stuff, but lovely stage craft. Another element of an act shaking off the rust’n’dust, muscle memory for delivery, new material etc etc etc. He also took the prize for traveling furthest for a 5-minute spot, from Maidstone. Yet again, I salute the efforts of acts who put in so much damned commitment.

We took a break, gained some audience. One couple were so cool, Nathan had the biggest smile I have seen since a week last Friday (different story) and his lady friend was part Cypriot and whooped every time “Cyprus” was said. By anyone. That’s a gift to an MC. Or an act that feels their set is flagging.

Happily, the opening act in the 2nd half is half Cypriot and so, that went well. Another face from so long ago that I was thrilled to see again IRL, but also to laugh at, as she always has the goods, open, vulnerable and properly funny.

The final 2 open spots were new faces, the first was on just 10 gigs and I will hail him as actually one of the funniest of the night. Again, open, vulnerable, funny, really gave of himself and had me roaring several times. Booking you again soon!

Finally, Scotland made an entrance to close the open mic section. I have a lot of love for Scotland the country, the people and the comedy, and as an earlier crowd work discussion brought up, he was in the shadow of his fellow Glaswegian, the mighty Billy Connolly, the risk was a subconscious mantle had been established. Of course, he was no BC, no one is, but after just 30 gigs he had proper gags and a shockingly impressive mastery of the microphone and lead.

Anyone who knows me, has gigged with me, I pride myself on maintaining authenticity and never falsely flatter. It’s true to say, there was not a weak link in the chain last night. Yes, some, many, jokes fell flat. That’s inevitable, however, not one act had a bad one. Including the Virgin, and almost every first gig is a bad gig, that’s pretty much how it works. So, full respect to everyone in the room, the impressive acts and the loud and loving audience.

So, to the headliner. Vidura Rajapaksa is a Sri Lankan act who landed in the UK during the pandemic (comedy is all about timing, after all, huh) and I had heard good things about him. He is, after all, also the self-proclaimed “Brown Jesus”. Vidura was already booked for a 10 spot, I boosted him to close and he had myself and the crowd roaring and thinking. He’s a handsome and charming man, low-key and smart, highly recommended. After that spot I have already asked him if he will accept my offer to come and close another gig, if he will have me. He said “Yes”.

Conclusion: The odds really were against this gig working well. Limited real audience, unknown faces, new material-a-go-go, even a headliner whom, for the first time in 6 years, I had not seen before. Yet, with some focused questioning of the acts at sign-in, experience in writing balanced Running Orders, a back pocket full of (largely unneeded) MCing tricks and techniques and a bill full of acts that each had solid jokes, well, it can, and did, work.

Don’t assume anything. Play to win, bring your enthusiasm to lighten the room.

I have had shows that seemed like they were going to be empty and then 40 people arrive just minutes into the show (one time it was 58 Danish students getting off a bus outside the venue. They taught us the first chorus of their National Anthem and we all sang).

I know nothing of football, but I am familiar with the concept of “Playing to the final whistle”, and comedians, you need to approach every single gig with that mentality, you may shine out, or with all making the same effort, you can collectively save a show.