A Wonderful Success Story... And A Learning Opportunity 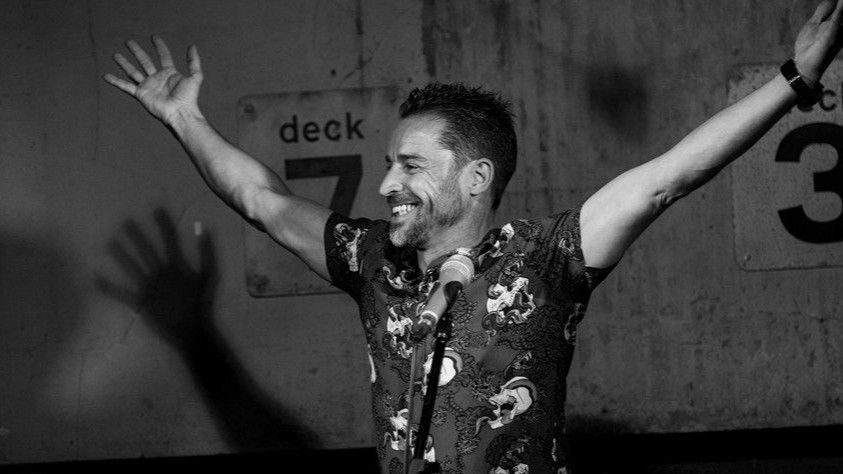 This week I felt an enormous sense of pride and joy for an act that I have known for many years. The joy was legit, the pride was kinda stolen, for the fact is Emmanuel Sonubi is the one who has earned the right to be prideful in his success. All the same, I could not help feeling the warm feelings engendered by his rise.

Emmanuel did his first ever gig with me some 8 years ago, back in 2013, and this week featured on arguably the top live stand-up TV show in the UK, Live At The Apollo.

Emmanuel is an example of so many wonderful elements of comedy and how to climb the hill from open miker to solid and successful professional act.
Emmanuel actually pulled this off in 6 years and that seems like an appropriate marker for the very best.

In stand-up there is an almost inescapable process to professional success and this man walked one of the straightest lines to that achievement I have ever witnessed.

Yes, I have seen a couple of especially brilliant acts hit levels of undeniable achievement in something like 4 - 5 years, however, these were the absolute cream out of more than 7000 people to perform on a We Are Funny Project stage.

If we shave off a couple of years for the pandemic, which is entirely fair, Emmanuel actually pulled this off in 6 years and that seems like an appropriate marker for the very best.

There are no short-cuts. Stage time, serious lessons and hard won experience are the only way forward in the meritocracy that is stand-up comedy

Now, in view of a mass of recent emails that I have received from new acts, I feel that it might be helpful to lay out the approximate path to success that acts would do well to consider. I fully recognise that in the earliest days of performing, people don’t know what they don’t know.

Indeed, many years ago I had cause to have a word with an act, who was also a friend, asking him to be a little more kind. The reason being, he had mockingly posted online that his friend had decided he wanted to have a stab at stand-up and asked this fella where he could “book a 10 minute spot”.

My friend took the line of “who does he think he is?”, as my friend knew all too well that, in London at least, 5 minute spots are standard and you don’t get a 10 spot until you have mastered a 5 spot and impressed suitably to get the bump up to a 10. That process is usually at least a year, maybe 100 x 5 minute spots, or more.

The We Are Funny Project has a built-in process for acts to progress. Everyone starts with a 5 minute spot and those who suitably impress me might be offered a 10 spot. My experience being that most acts trying to make this move up, often peter out at about 8 minutes. And that’s fine. They now understand they have to go away and work harder still, and maybe a few months later go for a 10 and this time it might well work. Congratulations, you just made it past Phase 2.

Being liked off-stage means a lot if you want to progress. I have seen several very funny and hard-working acts get rejected by the industry for the simple reason they were wankers

Now, having opened rounds of bookings since re-launching the live shows in September of this year, I have made it clear that 10 minute spots are available on my bills. There are a huge number of new acts entering the scene post-lockdowns and the fresh talent is exhilarating and fascinating, yet naturally, can’t immediately understand all the aspects of the scene.

I have had literally dozens of people with 3 - 15 gigs under their belts asking for a 10 spot and stating along the lines of, “I have enough material for 20 minutes”.

I have to dis-agree that such inexperienced acts have a 20, or even a 10. Or even a 5. And that’s absolutely OK, so long as the act keeps on gigging and learning. There are no short-cuts. Stage time, serious lessons and hard won experience are the only way forward in the meritocracy that is stand-up comedy.

I have amended my bookings announcements to state that acts must have at least 100 gigs to even be considered for a 10 spot. Further, I have added that there are 2 types of 10 spot: an act that has been killing the 5s and wants a chance to progress, or, an act that already has a killer 10 and is effectively auditioning for a future 20 minute headline spot with me, quite likely their first ever live 20/headline.

That’s the process. From a 5, to a 10, to a 20. By which time the act should be getting some amount of paid gigs around the country, have at least one foot outside of open mike, and start getting on the radar of industry agents.

From his first ever gig it was clear that Emmanuel was special, to this day, I regard it as one of the best first ever gigs I have ever witnessed (and I have witnessed well over 500)

Once the act signs with an agent, it’s almost always over for me seeing them perform in my rooms. The agent will put them on a new paid circuit, often universities and the like, blooding them for potentially bigger experiences in the future.

(Note: Some 2 years later, I often hear from the acts again as they desperately seek stage time for their first Edinburgh hour long show. My willingness to help is always based on the style in which they stepped up/away.)

Now, there is something of a character test when the act signs with an agent and realise they won’t be performing in their home open mike club, possibly my club, any longer. Some just cut ties with me and all the friends they made in open mike, pretty cold and brutal. Others explain the situation with an apologetic tone and are very cool IMHO. A rare few still pop by once in a while to work out some new material, a delight to see them, and frankly, grateful for the relative prestige they bring to my shows. Alas, the former process of “coldly cutting ties” is the most common, which I find rather saddening.

Emmanuel was classy in this regard, having signed with, for my money, one of the very best agencies in the country and who have clearly nurtured him and looked after him wonderfully.

From his first ever gig it was clear that Emmanuel was special, to this day, I regard it as one of the best first ever gigs I have ever witnessed (and I have witnessed well over 500). I showered praise upon him after his first set, and he later told me, having emailed for his first spot, he prayed I would not reply and thus he would not have to perform. Well, I did reply...

I believe that in the following 2 or 3 years I gave the man as many spots as I could, including his first 10, his first headline spot and his first crack at MCing. It wasn’t just that he was great on stage, he was also warm and charming off-stage. He didn’t carry any petty jealousies of other comedians or act above his station, he was simply “a good bloke” and everyone liked him.

Emmanuel worked it. Did the gigs, learned the lessons, climbed up through the spots, was picked up by a great agency

Being liked off-stage means a lot if you want to progress. I have seen several very funny and hard-working acts get rejected by the industry for the simple reason they were wankers. That said, I have also seen several wankers with talent go on and thrive. All the same, not being a wanker seems a solid life choice, by any standard.

Now, Emmanuel has changed his physical shape and is more lean these days. When he started comedy, Emmanuel was 260lb and often worked as a nightclub bouncer (I won’t share the advice he once gave me on a guaranteed way to defend myself in a fight, brutal). Not once did I see him use his massive, muscled figure to intimidate any one, indeed, it might have been his need to avoid intimidating people that built his charm chops. Whatever, he was great on stage and delightful away from it.

Emmanuel worked it. Did the gigs, learned the lessons, climbed up through the spots, was picked up by a great agency, was further groomed and developed with broader opportunities than open mike rooms can ever provide, and now, he just did Live at the Apollo.

The man just hit a new level with ample room to grow even further. It could not have happened for a better person in my humble opinion.

And so, to the acts with 9 gigs who tell me they are ready to not just deliver a 10 spot, but headline with a 20… I am seriously considering giving one of you the shot. If you are in the London region and understand what you are getting yourself in to... well, you should be able to contact me accordingly.

I think that car crash gig could be a lucid and cautionary tale… on the other hand, I’ve seen Rocky, I can root for the underdog as well as the next person, and wouldn’t it just be incredible if the act proved me wrong and crushed the gig?

One of the best things that newer acts can do is consider the methods and path that Emmanuel Sonubi took, learn from his process and style and work it, work it, work it… and the We Are Funny Project will help as much as we can for as long as we can.

Great thanks to Steve Best at www.stevebest.com for all photographs featured in this blog (not the ones of Emmanuel)