The Seven Most Powerful Ways to Improve Your Stand-Up Comedy 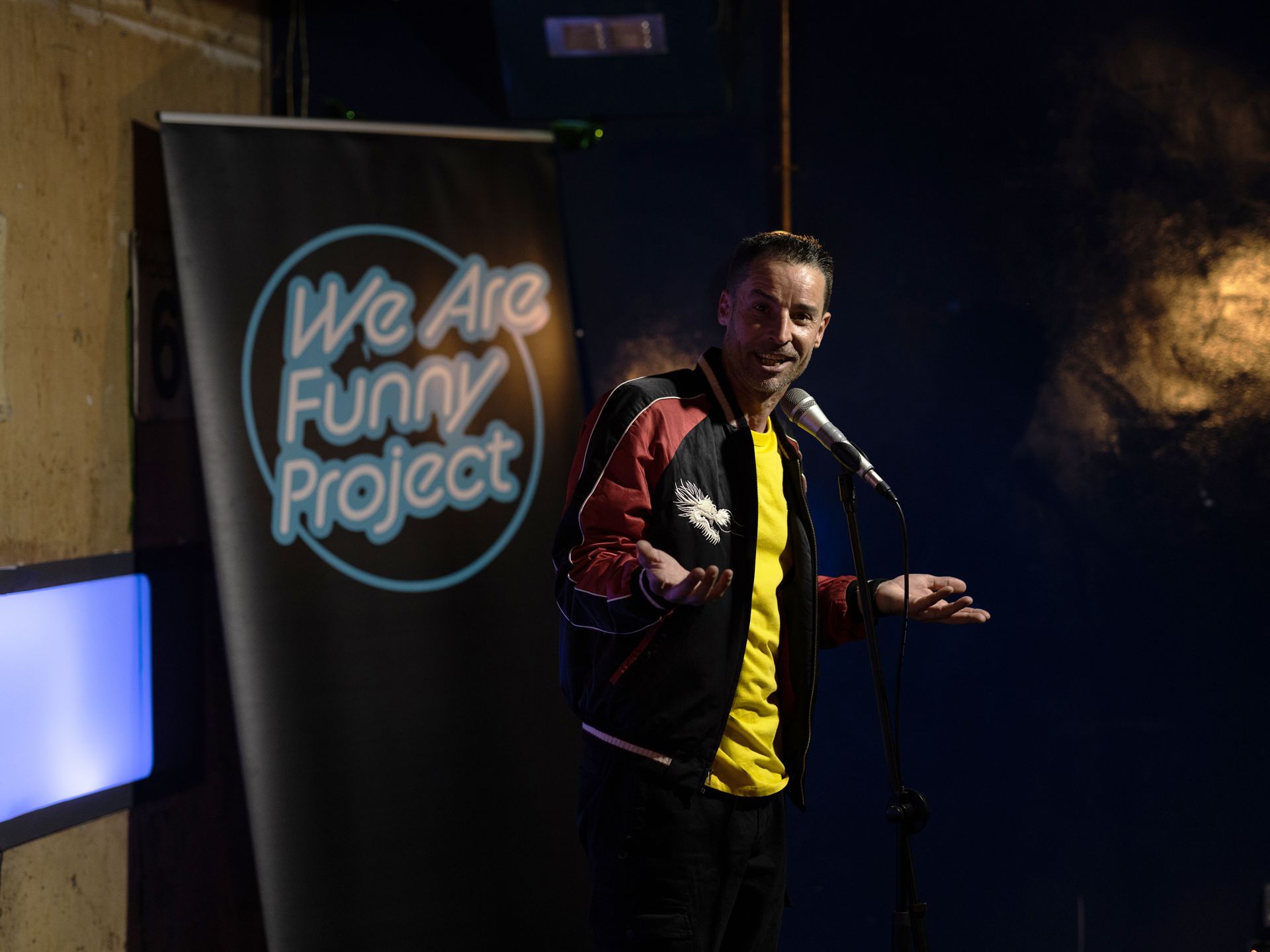 This blog is the first in a 7-part series, a countdown through the most powerful tactics to improve your stand-up skills.

Naturally, the rankings are subjective. Although entirely correct!

Regardless, feel free to ultimately re-order them. Whichever way you think of it, these will demonstrate the best ways to improve your stand-up writing and performances.

Click the Above Image to Obtain This Free eBook
Following more than a decade running open mike gigs I have gleaned a lot. At least, when it comes to acts improving in their chosen art of stand-up comedy.

Allow me to be clear about my appreciation for anyone who is starting off in stand-up comedy. These brave and creative souls have a significant amount in common. Echoing similar traits and influences.
These folk are almost always ardent fans and admirers of professional stand-up comedy. Often able to quote “bits” from their favourite comedians at length.

Second, a common experience is for them to watch the professionals and think, “I could never do that”.

Then, at some point, stumble in to watch an open mike gig, and having assessed some of the performers, quietly murmured, “I can do better than that”.

Third, they have had some success in making people laugh in the real world, in their day-to-day life. Swiftly recognising that if laughing feels great, then being the one to generate the laughs is bloody wonderful. Maybe, just maybe…

Fourth, while they often do not recognise it within themselves, they are courageous and daring people. It takes a lot of spirit to get on the stage the first time. Making a room full of strangers’ laugh is fraught with the prospect of (apparent) failure and humiliation. Yet they do it anyway.

Only later, many more gigs down their comedy path, are they able to realise that almost everyone fails the first time(s). The first gig(s) are actually about crossing the psychological barrier of getting up and having the stones to “just do it”.

Once the essential first steps/gigs have been under-taken, the mission changes.

It’s no longer about “having a go”. It becomes about developing beyond raising a few chuckles. It’s about acquiring more and bigger laughs.

The positives and negatives are in-built.

Doing well in a performance, getting lots of laughs and seeing how happy you made the crowd is a glory moment. The endorphin and adrenaline rushes are simply exquisite.

On the downside, solitary late-night journeys home, lamenting a stinging, laughter-light performance can be brutal.

And so, here, I provide you a series, a chart rundown, of the most powerful and potent ways to improve your stand-up.

Whether planning your stand-up debut, or you’ve a few hundred open mike gigs under-your-belt, I hope these will be helpful for you.

On the other hand, if you are years in, regularly getting paid for your comedy performances, then this blog is not really for you.

You may want to check out a different article, such as “Professional Comedians Vs Hecklers”.

If you have read this far, you'll want to leave your email address below to get all our blog posts, news and special offers direct to your inbox.
Success! Now check you email to confirm your subscription.

Most open-mike performers started their comedy journey because they adored high-end pro comedy. Very often regularly going to professional gigs, or at very least, devouring comedy specials from the most lauded comedians on the planet.

Alas, far too many performers make the error of getting wrapped up in exclusively performing in the amateur world and stop attending the pro shows.

While there are great jokes and performers in open mike, clearly, the median standard is below that of the professionals.

Observing the other acts on an open mike bill in which you will perform has value, for sure. You can get a sense of what works and what does not, enjoy some laughs, see some friends. However, the limits are considerable.

Most open mike acts are performing for shortened periods and so there is no opportunity see a sustained and paced performance of, say, 20 minutes or more.

Further, if you are performing on the stage that night, you are surely somewhat dis-engaged as you are quietly focusing on the material you’ll soon be delivering. Thus, not really paying full attention to the other acts. Even after you have performed, the adrenaline rush/relapse skews your take.

Joke theft is utterly forbidden. Nonetheless, while watching a pro show, you can take inspiration from a style, technique, topic that you could consider and morph into something specific to you.

The wonderful standard of performers ought to bring you three things.

First, lots of delicious laughs, reminding you why you loved stand-up so much in the first instance. It’s just a great night out.

Second, inspiration. Having gotten some stage experience yourself, maybe the previous, seemingly unattainable quality will no longer seem so utterly impossible to you?

Third, lessons in mastery. There are tricks and techniques in stand-up and once you have performed a little, the strategies can become more apparent to you than the average punter. Watching professionals can only be of benefit to the amateur.

If you were a keen guitar player, it could only help to watch a brilliant player up close. Should cycling be your thing, then observing professionals in action would benefit you… it’s not hard to see the potential upside. All while laughing your arse off.

After all, the limited laughs afforded a fellow performer in an open mike show in which you are performing can become stale.

Ensuring you attend quality events, observing superior comedians, with nothing expected of you beyond being good audience is liberating, instructive and simply good fun.

Next time – Number 6 in our countdown to the most effective steps towards excellence in your stand-up.

Alfie Noakes's in-depth, in-person comedy workshop is ideal for stand-ups, or anyone who might wish to pump up their public speaking skills. Get ready to enthrall and delight your audience.
More details

Online classes for comedians at every level of experience 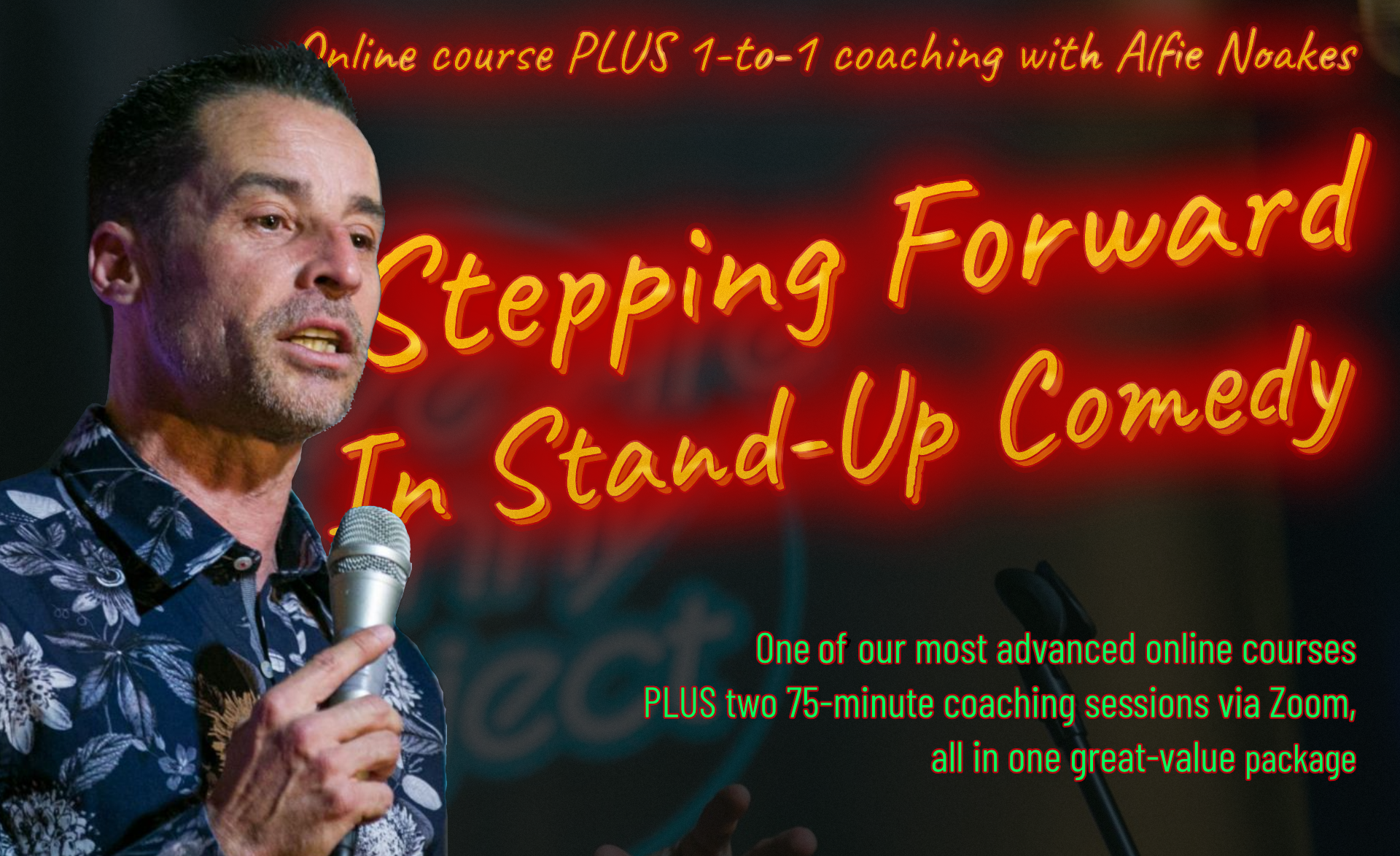 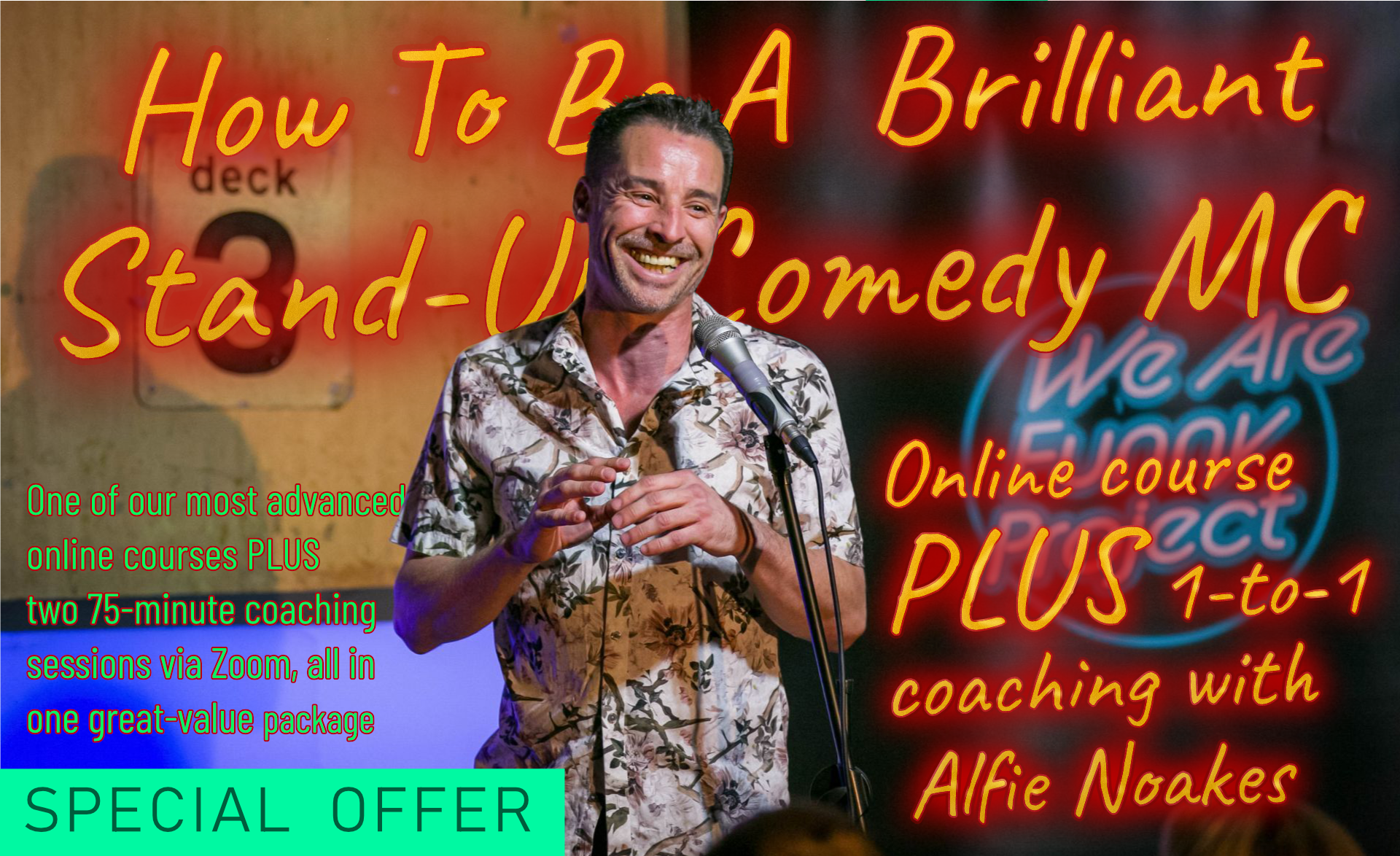